History and food. I'm not that deep.

Although I was born in Ohio, I’ve spent most of my life in the South, specifically South Carolina and for the last 20 years Virginia. I know that doesn’t officially qualify me as a Southerner — darn it — but to the depths of my soul I feel more Southern than Midwestern.

I have lots of Southerners in my family tree, some of which I’ve written about on this blog, and my research interests lie almost entirely in the antebellum South. I subscribe to Garden & Gun and The Bitter Southerner, for goodness sake, but I know none of this matters.

Like I said, I was born in Ohio and true Southerners are sticklers about these things. But despite my shortcomings, I’m a big fan of Southern cuisine, particularly Lowcountry and Creole food.

For a few years after college, I lived in Charleston, South Carolina, which is famous for its Lowcountry cuisine — shrimp and grits and that sort of thing. Because I worked as a newspaper reporter and then a police officer while I lived there, I could never afford to eat at Poogan’s Porch, 82 Queen, or any of those iconic Lowcountry restaurants.

You might expect that to be followed by, “So, I bought a copy of ‘Charleston Receipts’ and learned to make shrimp and grits!” but I wasn’t much of a cook back then. Thinking about it, I don’t remember cooking anything fancier than the occasional holiday turkey before age 40.

Thinking about it further, I don’t think I really started cooking, at least not anything interesting, until I was laid off from my marketing job in 2009. After that, as a freelance writer, I had more time to cook. Working at home, I could start dinner at 3 p.m. instead of arriving home at 5:30 or 6, hungry and with no interest in cooking for two hours.

So, except for the money thing, I guess losing that job wasn’t a complete loss. Huh.

Enough on that. What I’m really blogging about today is chicken country captain, the dish I’m making for Christmas dinner on Sunday. I’ve made it a couple-three times before, including for Christmas two years ago. Hopefully, no one minds the repeat.

Country captain is an old recipe, originating during the Colonial period. It found its way to the Lowcountry from British-occupied India. According to the “Food Lover’s Companion,” country captain is “said to have taken its name from a British army officer who brought the recipe back from his station in India.”

The list of ingredients is about 8 inches long, but don’t be intimidated by that. It’s not difficult to make. It doesn’t have to be all that expensive either. For example, the recipe I use calls for three pounds of chicken breasts and two pounds of thighs, but I’m using all thighs.

Thighs are less expensive and better tasting, in my opinion, anyway.

It calls for two-and-a-half cups of white wine, so I bought a $6 bottle of Pinot Grigio. That should work fine. That said, my wine advice: Don’t buy anything for cooking that you wouldn’t want to drink the rest of.

Onions, peppers and celery are relatively cheap, and it’s likely most of the spices are already in your pantry. My recipe also calls for a pound of breakfast sausage, and you can go as plain or as fancy as you want with that.

It serves 12 to 16 people and freezes wonderfully, so the 20 bucks you might spend results in several meals, depending on the size of your family.

There are many recipes out there for country captain. The one I use was created by native Southerner and celebrity chef Alex Hitz. It ran in House Beautiful magazine a few years ago.

As he puts it, it’s been “revved up … for today’s foodie palates.” To be honest, this is the only country captain I’ve ever made (or eaten), but I don’t plan to switch recipes. It’s perfect.

When I was in Santa Fe, NM, in November, I went to this neat antique shop called 136 Grant. It’s located on Grant Avenue, not too far from the Santa Fe plaza and right around the corner from the Georgia O’Keeffe Museum.

136 Grant is housed in the historic Pinckney R. Tully House, which was built by its namesake in 1851. While the Tully House looks like brick from a distance — and I apologize for not having taken a close-up photo — it’s actually adobe, painted to look like brick.

Brick wasn’t easy to come by in mid-19th-century Santa Fe. After all, New Mexico had only just become a U.S Territory in 1846 and the Santa Fe Trail, which stretched from Missouri to Santa Fe, was a far cry from a modern-day highway.

If you travel around Santa Fe today, you might see a row or two of brick at the roof line of some New Mexican Territorial-style structures. It’s there for ornamental purposes and to protect the building, at its most vulnerable point, from erosion.

Without ready access to brick but wanting that Eastern look of home, some 19th-century Santa Feans did the next best thing: tediously faux painted the entire home with brick-red paint and white, brick-sized rectangles. It’s pretty amazing, really. Even from about 12 feet away, the Tully House looks like brick, although you can’t miss the adobe’s rounded corners.

136 Grant has a friendly staff and a lot of different vendors. Most of the items in the shop are very different from what you’d see in an East Coast or Southern antique shop. For example, there were lots of Native American items, including pueblo pottery, jewelry and silver work. One thing they did have that seemed typically Southern to me, however, were a few memory jugs.

If you’re not familiar with the memory jug, it’s basically a jug (or jar), covered with clay or mortar that has all kinds of crap stuck into it. That might sound crude, but hey, look at these photos and you’ll probably agree. And I say “crap” with affection because I like memory jugs.

There are some really great examples of memory jugs on the Internet, including here on this artist’s website.

There are different theories as to the origins of the memory jug. One is that they were used in Southern, African-American burial traditions to mark grave sites. Everyday items, once owned by the deceased, would be pressed into clay or mortar that had been spread on the jug. The items used were thought to be useful in the afterlife, sort of like the stuff buried with Egyptian mummies.

Another theory, albeit still involving mourning traditions, is that memory jugs evolved out of Victorian sentimentality and a passion for collecting. As described on this website, “Saving mementos of loved ones has universal appeal … the odd button, a single earring or other bit of jewelry that reminds one of the deceased relative.”

Memory jugs are a little on the tacky side, but I’ve always liked them, and seeing the ones at 136 Grant inspired me to make my own. So, one day when I should have been working on a big writing project for a local magazine, I went to the hardware store, bought some pre-mixed mortar and made a memory jug.

I didn’t have any old family mementos to press into the mortar, but I did have a good bit of what I’d describe as “junk jewelry”: broken and orphan earrings, costume jewelry and that sort of thing. I also had an amber-colored beer bottle that I’d found in an old trash dump in the woods near my house.

That said, I love sifting through old trash dumps for bottles, broken pottery and other items. You do have to be careful though. Wear sturdy shoes with thick bottoms, to protect your feet from broken glass, and avoid dumps in warm weather, when ticks and snakes are out and about.

But back to my jug. After spreading the mortar on the bottle, I pressed bunches of junk jewelry into the sides until it was nearly covered. Then, I waited for it to dry, which took several hours. 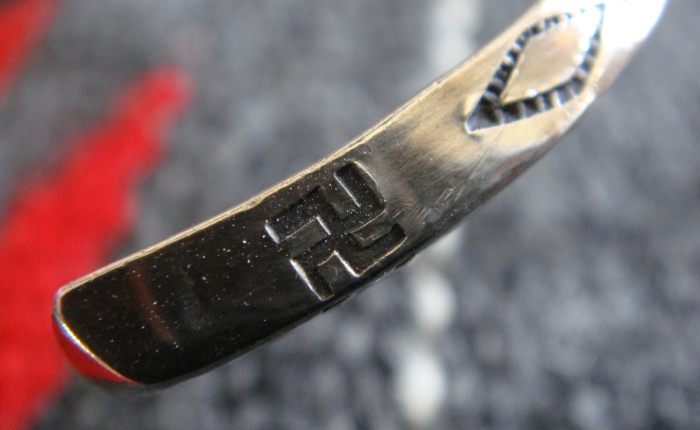 A few months ago, I bought a vintage, sterling silver bracelet at a local antique shop. On it are stamped a number of symbols, including four tiny swastikas. Now, before anyone starts posting ugly comments about me being a Nazi — because I’m not — let me briefly explain the history behind the swastika.

After reading this article, hopefully you’ll understand why I bought the bracelet, as well as why I’m torn about whether or not to wear it.

According to scholars, the origins of the swastika — also called the “whirling log” — go back about 6,000 years. And apparently they’re all over the place, if you just pay attention. As Dottie Indyke writes in this article in the Santa Fe Collector’s Guide, “… anyone who looks at art or architecture, no matter how casually, will eventually see the symbol.

“The Navajos, Tibetans and Turks incorporated the swastika into their rugs. Arizona’s indigenous Pima and Maricopa people wove them into their baskets and painted them onto their pots. In Asia the emblem is found on everything from clothing to political ballots to the thresholds of houses.

“Swastikas are carved into the Capitol Building in Washington, D.C., Philadelphia Museum of Art and many ancient Buddhist and Mayan temples. At Albuquerque’s KiMo Theater, built in 1927 and recently restored, swastikas adorn the proscenium, entryway and the building’s exterior. Elsewhere in New Mexico, they are evident in the architecture of the Shaffer Hotel in Mountainair and the Swastika Hotel in Raton (now the International Bank).”

According to Indyke, the swastika is “one of the oldest symbols made by humans,” and it originated with the Sanskrit word for well-being, or literally “good be” — a far cry from what it commonly represents today.

Based on my limited knowledge of Native American jewelry making, I think my bracelet is Navajo, or at least made in the Navajo style. I say this because its shape and style are identical to one I bought directly from a Navajo silversmith.

The company was famous for its waitresses, who were called “Harvey Girls.” Fred Harvey also had curio shops, and one of the things they sold was Native American jewelry.

My bracelet dates to sometime before 1940. How do I know this? As Indyke tells it, after Adolph Hitler hijacked the swastika for his own evil purposes, several Native American tribes formally decided to stop using the symbol.

“In 1940, in response to Hitler’s regime, the Navajo, Papago, Apache and Hopi people signed a whirling log proclamation,” Indyke writes.

“It read, ‘Because the above ornament, which has been a symbol of friendship among our forefathers for many centuries, has been desecrated recently by another nation of peoples, therefore it is resolved that henceforth from this date on and forever more our tribes renounce the use of the emblem commonly known today as the swastika … on our blankets, baskets, art objects, sand paintings and clothing.”

Thus, back to the reason I’m reluctant to wear what is otherwise a beautiful silver bracelet: I don’t want anyone to catch sight of the tiny swastikas and think I’m a Nazi or white supremacist. On the other hand, wearing the bracelet — assuming I’m not assaulted in the process — could result in some interesting, enlightening conversations.

Readers, what do you think? Should I wear it or not?

Also, on this blog there are numerous photos of whirling logs/swastikas used in architecture.